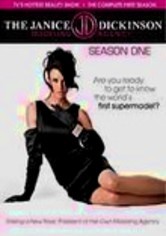 2006 NR 2 discs
Self-proclaimed supermodel prototype Janice Dickinson -- who gained a cult following with her outspoken antics on shows such as "America's Next Top Model" and "The Surreal Life" -- stars in this raucous reality series that tracks the launch of her very own modeling agency. The first season finds Janice weeding through models at an open audition before commencing a targeted search for a reliable business partner.

Parents need to know that this reality series focuses on discovering men and women who have the potential to become models. Host Janice Dickinson (herself a former model) has an abrasive, overbearing personality. She tells potential models to lose weight, firm up, or that they're too short. She refers to herself as "the world's first supermodel." She also gets botox injections on the program.

Swear words are bleeped out.

Janice is overbearing, constantly yelling, passive-aggressive, abrasive, and egotistical. She's condescending to the models, building them up and then knocking them down. On the plus side, there's diversity in the cast.

The entire series plays like an ad for the modeling agency.