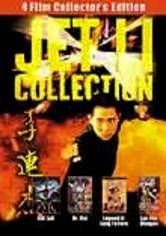 2005 NR 3h 0m DVD
In Legend of Kung Fu Hero, gifted youngsters perform solo martial arts demonstrations -- including an 8-year-old Jet Li in his first appearance on film. The documentary Lee-thal Weapon, which charts his life and career, features an interview with Li. The first action star to emerge from mainland China, Li has become one of the biggest names in the kung fu genre thanks to his jet-fueled martial arts mastery.