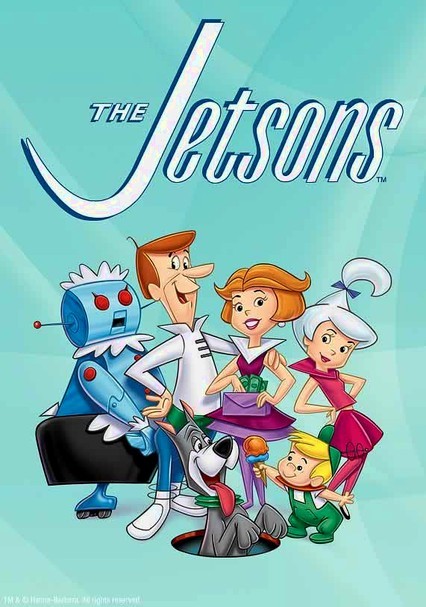 1962 TV-Y7 2 seasons
Hanna-Barbera had already made a hit out of the past ("The Flintstones"), so it created this future-based counterpart about hapless computer guy George Jetson and his typical space-age family, who drive flying cars and get their food from a machine. Wife Jane and daughter Judy obsess over fashion, while young son Elroy conducts complex science experiments and robotic maid Rosie takes care of the chores. The show spawned a 1990 feature film.

This vintage hit from Hanna-Barbera Productions chronicles the adventures of George, Jane, Judy and Elroy Jetson. Although they drive flying cars and have a robot maid, the Jetsons still deal with the same kind of problems that bedevil most families. This collection contains all 24 episodes from the cartoon's first season. Mel Blanc and Penny Singleton (from the "Blondie" movie serials) are among the voices.

To satisfy his quick-tempered boss's demands, George Jetson (voice of George O'Hanlon) judges a dog competition, infiltrates a rival company dressed as a woman and leads his family to victory on a TV game show in this collection of episodes from the classic cartoon series. The futuristic Jetson family also welcomes new pet Orbitty into their fold, experiences some major malfunctions with robot maid Rosie, wins the lottery and much more.

Parents need to know that this classic cartoon deals with old-fashioned family values in a futuristic setting. Although financial security and family relationships are important to the Jetson family, some of today's viewers may find the traditional male/female roles a little dated.

The series is about family, and highlights the family values of the time it was originally on the air.