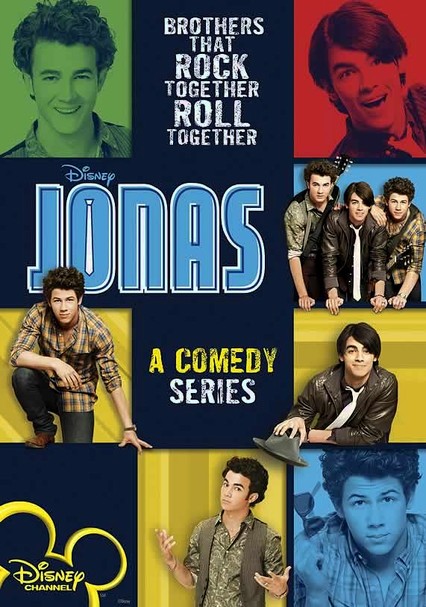 2009 TV-G 2 seasons
Musically inclined siblings Joe, Kevin and Nick Jonas play televised versions of themselves in this Disney Channel sitcom that casts them as the Lucas Brothers, a family band balancing widespread fame with everyday life.

Call it the Jonas Brothers's guide to dating: Whether a crush, a fling or a burning infatuation, the sibling stars of "Jonas" have tried them all, and this collection of episodes from the hit musical sitcom compiles their findings. Keeping your heart on straight isn't easy when you're a member of the world's biggest boy band, but Kevin, Joe and Nick Lucas (Kevin, Joe and Nick Jonas) get lots of practice -- and a few good songs -- learning how.

Parents need to know that this upbeat series stars the Jonas Brothers as members of an ultra-popular teen rock band. While the show isn't necessarily based on the guys' real-life selves, their characters do have the same first names, and the "fictional" band's name is Jonas, making publicity for the Jonas Brothers an unavoidable byproduct of the series. The show's move to Los Angeles in its second season changes its tone to a degree, and viewers will find more mature themes like dating and the guys' explorations of their inidividual endeavors taking the place of the slapstick antics of the past. But true to form, the JoBros still manage to send positive messages to kids about family ties, self-acceptance, and healthy relationships.

Some flirting; lots of female fans have massive crushes on the three guys -- and they're sometimes chased by throngs of adorers. Dating becomes a stronger theme of the show starting in season 2; Joe and Stella's relationship develops beyond mere friendship, so there's some hand-holding and and close embraces.

The show emphasizes the importance of family and friendship, and the guys learn positive (if obvious) lessons about staying grounded and appreciating what really matters in life.

Obviously the Jonases are part of a mega-marketing franchise (clothing, music, books, etc.), but there's no direct product pitch in the show. Each episode incorporates a few selections of the guys' music.