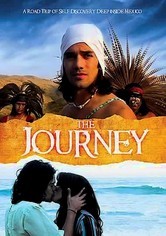 2007 NR 1h 33m DVD
When his girlfriend, Rhona (Kazandra Santana), dumps him to join an archaeological dig in Mexico, chronic couch potato Steve (Andres Londono) rouses himself and heads south of the border after her. He soon develops an unexpected soulful connection with Mexico and its people. Learning he may have a rival for Rhona's affections, Steve hopes his transformation is enough to win her back. Scott Marcano directed and co-wrote this indie romantic comedy.