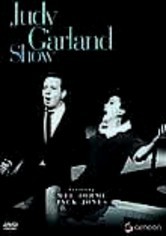 1963 NR 1h 40m DVD
In addition to her legendary movies, in the early 1960s, the incomparable Judy Garland starred in her own television variety show, which was chock full of fabulous songs and an array of top-flight guests. In this memorable episode, Garland's guests include velvety smooth vocalist Mel Torme and Diahann Carroll, an accomplished singer who was one of the first women to break the racial barrier in television.