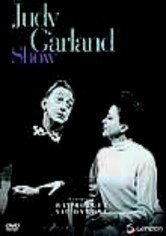 1963 NR 1h 40m DVD
In addition to her legendary movies, in the early 1960s, the incomparable Judy Garland starred in her own television variety show, providing the versatile entertainer with a venue for fabulous songs, comedy sketches and an array of top-flight guests. In this memorable episode, Garland's guests include old friend and Wizard of Oz co-star "The Scarecrow" Ray Bolger, MGM songbird Jane Powell and sultry crooner Vic Damone.