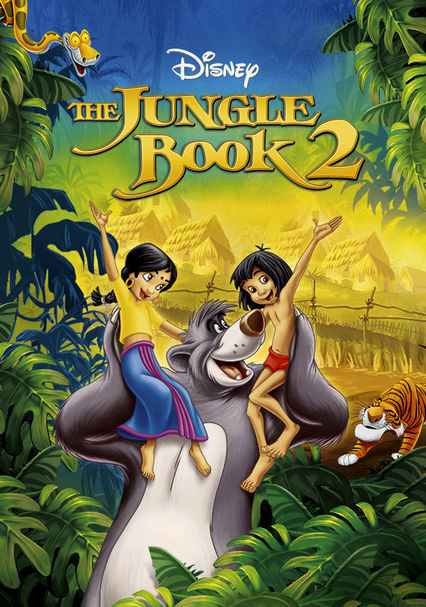 2003 G 1h 12m DVD
In this animated sequel, Mowgli is living in the village with his friend and his stepbrother, but he misses Baloo and the rest of his pals. He decides to return to the jungle, but waiting for him there is his old nemesis, Shere Khan.

Parents need to know that Shere Khan, the villainous tiger who appeared briefly in the original Jungle Book, is a menacing presence throughout this sequel, with blazing eyes, an ominous voice, and scary music that accompanies him. Despite the upbeat musical numbers, funny jungle creatures, and endearing "man-cub" hero, there is a considerable amount of suspense and cartoon danger to Mowgli and two other young members of the Indian village that borders the jungle. No character, however, is injured or killed. There are important messages about listening to parents, behaving responsibly, and protecting those we care about.

All cartoon action, heightened by suspenseful music, some dark jungle settings, and lots of leering and teeth-bearing. Two jungle creatures, a snake (Kaa) and a tiger (Shere Khan), stalk, chase, and threaten to attack three human children. The kids get lost, fall into a pit, cover dangerous terrain while trying to escape, and ultimately face their enemy at close range. Shere Khan is set upon by spears and fire to keep him at bay. No one is hurt or killed.

Young Mowgli's journey back into the jungle teaches him to make better decisions, to obey those who have his best interests at heart, and to value the rules and responsibilities that keep his community safe and thriving. Baloo, the comical bear, realizes that being a good friend involves more than playing and having fun.