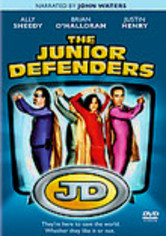 2007 NR 1h 24m DVD
Though it's been 25 years since the cancellation of his favorite show, "The Junior Defenders," Norman (Fred Hazelton) still can't let go. To keep the adventures alive, he races across the country in a stolen Winnebago and kidnaps the former child stars of the show. Written and directed by Kevin Spiegel, this hilarious romp starring Ally Sheedy features cameo performances from Florence Henderson, Kevin Smith, Pauly Shore and others.