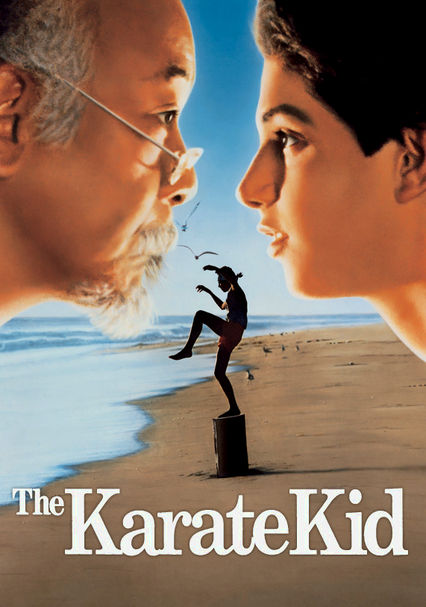 1984 PG 2h 7m Blu-ray / DVD
Hassled by the school bullies, Daniel LaRusso has his share of adolescent woes. Luckily, his apartment building houses a resident martial arts master: Kesuke Miyagi, who agrees to train Daniel -- and ends up teaching him much more than self-defense.

Parents need to know that this classic '80s martial arts movie is still a fine pick for families with older tweens. The Karate Kid was re-made in 2010 with a younger perspective starring Jaden Smith. It has a fair number of swear words (including "s--t"), insults, and fights -- as well as a scene of marijuana use. This is a standard new-kid-in-town flick, but it's also got soul thanks to the teacher-student relationship between wise Mr. Miyagi (Pat Morita) and lonely teen Daniel (Ralph Macchio). Issues of class, race, (teen) romance, and even war are explored in this coming-of-age tale, where karate is a metaphor for life.

Daniel and Ali flirt, go on dates, and kiss/embrace. Johnny kisses Ally without her consent, and she pushes and slaps him.

Several fights -- mostly outside of the martial arts competition. Fistfights, which are usually five-on-one, end in black eyes and bruised ribs for Daniel and his rivals. During the karate competition, the sparring is "sanctioned," but people still end up hurt.

Even though one character says that "fighting doesn't solve anything," the script seems to indicate otherwise. The movie also deals with remembrance of U.S. wartime injustices. But hard work, dedication, and discipline are all valued. Respect for your elders is important.