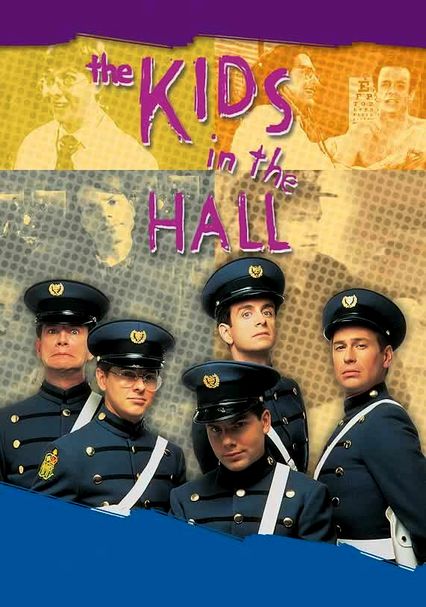 1989 TV-14 3 seasons
Mark McKinney, Bruce McCulloch, Dave Foley, Kevin McDonald and Scott Thompson make up a quirky sketch comedy group who indulge in pop culture parodies, celebrity impersonations -- watch for Thompson's Queen Elizabeth II -- and more. The Kids oftentimes appear as themselves rather than as characters, hilarious monologues are aplenty and courting controversy is not something with which this troupe is unaccustomed.

Sketch comedy troupe the Kids in the Hall -- Dave Foley, Bruce McCulloch, Kevin McDonald, Mark McKinney and Scott Thompson -- turn the mundane into the surreal with their zany characters and stories in this Emmy-nominated series. Highlights from Season 1 include discussions about menstruation, the story of the big crouton, the wisdom of the 30 Helens, and the exploits of Cabbage Head, Head Crusher and Buddy Cole.

Mainstream comedy gets a bizarre twist courtesy of cutups Dave Foley, Bruce McCulloch, Kevin McDonald, Mark McKinney and Scott Thompson in the sophomore season of this brilliant sketch show. Strange signature characters such as the Chicken Lady, Cabbage Head and Mr. Heavyfoot all make appearances as the kids take aim at everything from corporate culture to the drug scene, sexism and suburban angst.

Singularly, they're comics Dave Foley, Bruce McCulloch, Mark McKinney, Kevin McDonald and Scott Thompson. But together, they're the Kids in the Hall, a comedy troupe known for displaying its oddball antics on HBO in the late 1980s and early '90s. This collection of skits from the show's third season resurrects all of your favorite characters -- including the Chicken Lady, Cabbage Head and Mr. Heavyfoot.

Parents need to know that this Canadian sketch comedy series uses sophisticated -- and sometimes mature -- humor designed to make adults laugh. That means you'll hear unbleeped language (including "f--k" and "s--t") and see some skits that revolve around sexual jokes and innuendo. There's occasional cartoonish violence, too, as well as a few scenes that involve alcohol or drugs. Most of the humor will go over kids' head, although there are a few sketches -- particularly a recurring segment in which a character tries to "crush" people's heads with his fingers -- that will probably appeal to them.

Some sex jokes, including a few jokes intended to make fun of homophobia. A few sketches include partial nudity, such as bare bottoms shown from the back.

There's no real overarching "message"; the takeaways change from sketch to sketch and are usually silly and/or comedic.