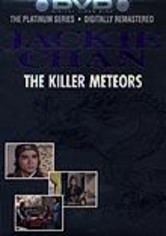 1976 NR 2h 0m DVD
Jackie Chan fans will want to check out the martial arts master as they've never seen him before -- as a villain! Wa Wu-Bin (Chan) does battle with the Killer Meteors (Yu Wang), who's earned his nickname from a secret weapon that renders him invincible. There's plenty of fast-fisted action when Wang and Chan go to war … and only one will survive!