The King: The Story of King David 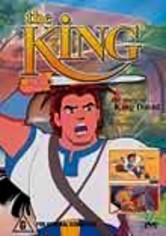 The King: The Story of King David

2004 G 1h 15m DVD
One of the greatest heroes of the Bible, King David of Israel has stood as a beacon of strength through the ages. Long before Jesus Christ was born, the ancient Kingdom of Israel was ruled by David. This wonderfully animated story depicts the hardships, battles (including the young David's legendary face-off with giant Goliath) and love lost and recaptured during the eventful life of Israel's most honored king.