The King of Kings: Roadshow Version 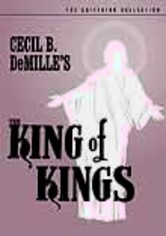 The King of Kings: Roadshow Version

1927 NR 2h 35m DVD
This uncut, restored digital version of Cecil B. DeMille's silent epic, whose auspicious premiere was the 1927 grand opening of Grauman's Chinese Theatre, is 45 minutes longer than the general release and includes two scenes in Technicolor plus a revamped musical score. One of the highest-grossing films of its time, this lavish reenactment of Christ's life features a cast of thousands and stars H.B. Warner, Ernest Torrence and Joseph Schildkraut.