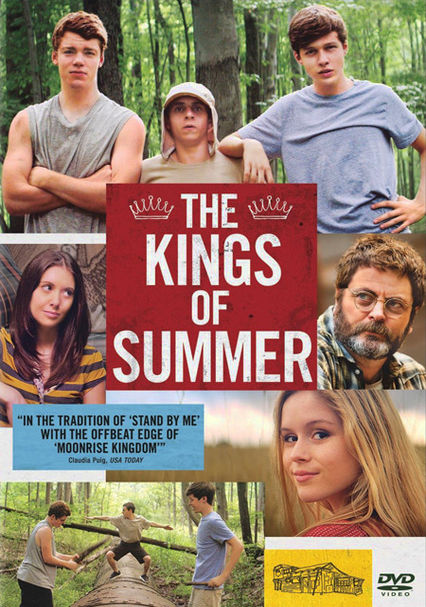 2013 R 1h 33m Blu-ray / DVD
Chafing under his widowed father's control, Joe Toy invites a friend and an offbeat new kid to help him build his own house in the nearby woods. Now that the trio is finally free from parents and responsibility, what's next?

Parents need to know that The Kings of Summer is a coming-of-age dramedy about freshmen/sophomore-age high school students. Like Stand by Me, the strong language is the main reason for the movie's "R" rating. Words include "f--k," "s--t," "c--k," and "c--t." There's also some teen drinking, mainly at a big party early in the film, and then some casual beer-sipping later on. There's a fairly intense scene of a character catching and skinning a rabbit, which appears real. Characters often fight and argue as well. Though there are some romantic stirrings between teens, there's little more than flirting (older characters are seen kissing), though one scene does suggest masturbation in the shower (nothing graphic is shown). Overall, the characters mean well (despite some iffy decisions/actions), and the film has worthy messages about friendship and self-sufficiency.

The main character traps a rabbit and kills it (off camera). He then carries it back to camp, skins and cleans it, and cooks it. It appears to be a real rabbit, with blood shown. Characters often argue with one another, albeit in a playful way. A snake bites a main character, who is subsequently rushed to the hospital. In an early scene, a school bully steals the main character's shirt. Main characters play a violent "shooter" video game.

The three main characters come of age in this story. They learn, somewhat, how to be self-sufficient and take care of themselves. They also learn that asking for a little help isn't a bad thing. They suffer through some betrayals -- both in romance and friendship -- but they find themselves wiser and more understanding. A father and son also learn to mend their fractured relationship.

The Boston Market restaurant chain is a large part of the movie's plot. The game of Monopoly is a smaller part. Barbasol shaving cream is shown. A character works on a snack wagon at a golf course, and many snack brands are glimpsed.

An early scene takes place at a big high school drinking party, with a keg that goes empty. The main characters attend the party but are denied drinks on account of being freshmen (though the school year has just ended and they're now rising sophomores). The movie's main teen female character is shown to be drunk at the party. In a later scene, two of the main teen characters are shown casually sipping beer in the woods but aren't shown drunk or overindulging. Adult characters are shown smoking cigars.