The Kingston Trio Story: Wherever We May Go 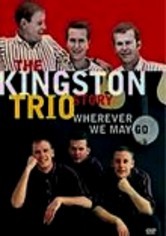 The Kingston Trio Story: Wherever We May Go

2006 NR 1h 30m DVD
Responsible for steering America toward a new appreciation of folk music in the late 1950s into the '60s, The Kingston Trio became legendary practitioners of the genre and won over countless fans. This retrospective video features rare performances, TV spots, interviews with band members Dave Guard, John Stewart and Bob Shane, footage from the group's 1981 reunion and appearances by Tommy Smothers and Al Jardine.