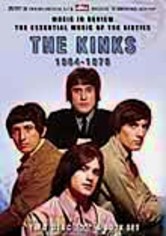 1964 NR 2 discs
An influential part of the "British invasion" of the 1960s, The Kinks were known for their intelligent lyrics, catchy melodies and offstage antics. This video is the definitive analysis of the band's music -- on stage, on film and on vinyl -- with music historians and critics weighing in to assess the rockers' every major release from their 1964 debut, a cover of Little Richard's "Long Tall Sally," through 1978.