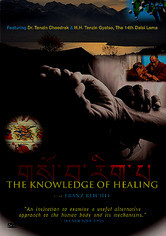 1997 NR 1h 29m DVD
This fascinating Swiss documentary visits with the Dalai Lama and his personal physician, Tenzin Choedrak, in his home in the foothills of India, as well as with Tibetan doctor Chimit-Dorzhi Dugarov in eastern Siberia. Subsequent interviews with physicians, scientists and other practitioners in Austria, Switzerland and Israel reveal the tried-and-true science behind the 2,000-year-old art of Tibetan medical thinking.