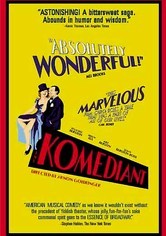 2000 NR 1h 25m DVD
Wistful and melancholy recollections of Yiddish theatre are conveyed in this documentary, which centers on the story of the Burstein family. The family honed their talents in New York and eventually became stars of the genre as they traveled around the world, acting, singing, dancing and telling jokes in Yiddish. The film also chronicles the history of Yiddish theatre, from its beginnings to its eventual decline brought on by the Holocaust.