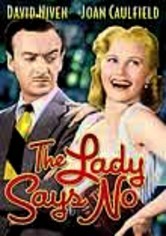 1952 NR 1h 22m DVD
Photographer Bill Shelby (David Niven) develops a strong attraction for best-selling author Dorinda Hatch (Joan Caulfield) the minute he shoots her for the cover of a national magazine. But he's shocked to find such a beautiful woman behind a rather cynical façade: her book cautioning against the "dangers" of men. Bill's not sure how to pursue Dorinda, until he discovers her Achilles' heel: jealousy! Directed by Frank Ross.