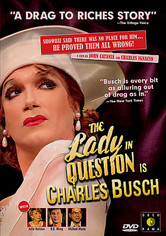 2006 NR 1h 34m DVD
Beginning in 2000 with the premiere of the hit Broadway play "The Tale of the Allergist's Wife," filmmakers John Catania and Charles D. Ignacio chronicle the "drag to riches" story of Charles Busch. Countless directors told Busch that he was "too gay" to make it as an actor, but that didn't stop the master of impersonation from becoming a cult phenomenon and one of the most luminous figures on the New York City stage.