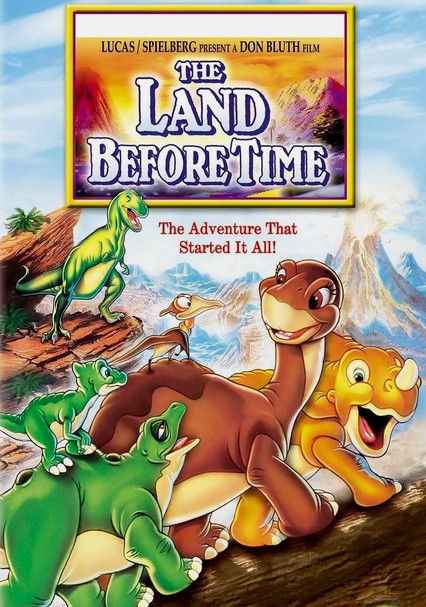 1988 G 1h 9m DVD
When an earth-shattering quake kills both of his parents, a young brontosaurus named Littlefoot teams up with other orphaned dinosaurs to survive. Learning to work together, they embark on a quest for the legendary Great Valley.

Parents need to know that The Land Before Time is a funny, character-rich story with adorable heroes to root for as they make a long journey to find a land of plenty. The film offers lots of introductory information about dinosaurs -- species, the planet as it was when they lived, their fight for survival. Kids who watch this movie should be clear and comfortable with pretend violence versus real violence. The young dinos face scary, sharp-toothed, roaring predators who chase them with an intent to kill in multiple sequences. They are at risk from natural disasters as well: earthquakes, a volcanic eruption, rock slides, and fire. The sad death of a parent after a battle early in the film and the separation of several young dinosaurs from their families are important to the story. None of the young heroes is hurt, and the tale is happily resolved. Released in 1988, this film became a full-fledged toy franchise with DVDs, television, sequels, and a wide variety of associated products.

Frequent cartoon action and violence: Carnivorous Sharpteeth (Tyrannosaurus rex) are predators who continually chase, menace, and attempt to kill the young heroes. Little Foot and company are faced with separation from family, earthquakes, rock slides, falls, volcano eruptions, fire, and constant fear of the predators. In one, early fierce battle, Little Foot's mother is killed. The little dinosaur grieves for her. His sadness and belief in her spirit play an important part in his journey.

Promotes teamwork, unselfishness, interspecies tolerance, resourcefulness, and perseverance. Clear references are made to "the circle of life." Although he's told that dinosaurs stick with their own kind, Littlefoot is a friend to everyone. Individual strengths are important to the group's success and survival. Illustrates power of family relationships throughout animal kingdom.