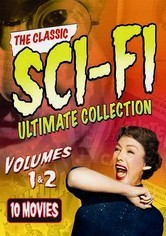 1957 NR 2h 38m DVD
Giant carnivorous creatures threaten innocent humans in these two classic sci fi actioners. In The Land Unknown, a team of explorers forced to land at the South Pole find themselves in an uncharted region full of vicious prehistoric animals; then, in The Deadly Mantis, an enormous insect wreaks havoc as it travels from the Arctic to Washington, D.C., chomping up unsuspecting victims along the way.