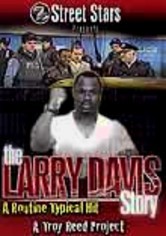 2003 NR 1h 20m DVD
At age 19, Larry Davis was the subject of one of the largest manhunts in the history of the New York City Police Department. After eluding the law for 17 days, Davis turned himself in to the FBI in exchange for their vow to investigate the NYPD's involvement in drug deals he says he was forced to participate in. Now, for the first time, Davis talks about that fateful night in 1986 when 30 cops arrived to kill him for backing out of a drug deal.