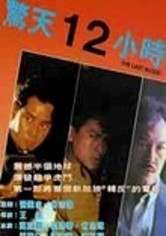 1991 NR 1h 33m DVD
When a terrorist group ambushes and shoots the Daka Lama at the airport, a gangster's girlfriend is caught in the crossfire. Learning that the two victims share the same rare blood type, Interpol agent Tai (Alan Tam) races to find the only donor before the terrorists can eliminate him. Tai teams up with the wounded woman's crime lord boyfriend (Andy Lau), and the pair sets out to get Fatty (Eric Tsang), the reluctant donor, to the hospital.