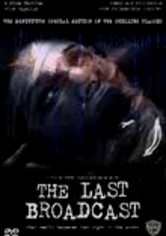 1998 NR 1h 27m DVD
The producers of a local cable access show venture into the New Jersey woods with a lone assistant to make a documentary about the legendary Jersey Devil. A year later, only one of them returns -- and he has the footage to prove he didn't kill his fellow filmmakers. While many people decried the similarities between this film and The Blair Witch Project when it premiered in 1999, The Last Broadcast was actually made first.