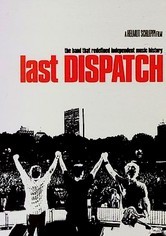 2005 NR 1h 21m DVD
Filmmaker Helmut Schleppi shadows the indie rock band Dispatch in the 12 days leading up to their 2004 farewell concert in Boston, an event that drew more than 100,000 people to hear them play. Part of the drama inherent in this rockumentary is the fact that the band -- which, during its nine years on the indie rock scene, was never signed by a label and never experienced traditional success -- was expecting a modest crowd.