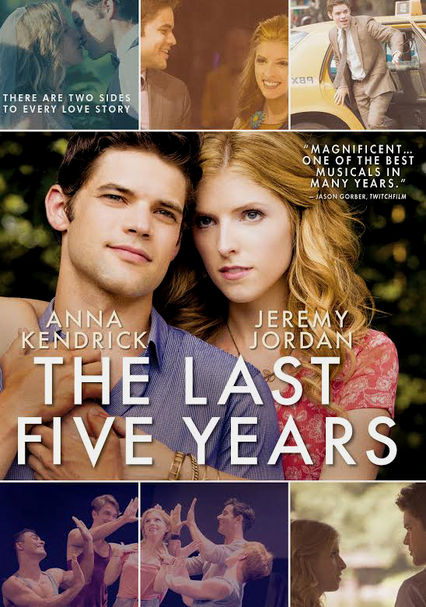 2015 PG-13 1h 34m Blu-ray / DVD
Telling their story through song, novelist Jamie and his actress wife Cathy retrace the blossoming and decay of their five-year romance from opposite ends of the timeline and meeting in the middle -- with Jamie's marriage proposal.

Parents need to know that The Last Five Years is based on an off-Broadway musical from 2002 in which a man and a woman take turns chronicling the demise of their relationship, with the twist being that Cathy (Anna Kendrick) tells her story from end to beginning, while Jamie (Jeremy Jordan) tells his side from beginning to end. Although the film is being marketed as a romance, it's obvious from the very beginning (Cathy's first song is about grieving the end of her marriage) that things don't work out for the couple. The language is occasionally strong, including "f--k" and "s--t," and there are a few scantily clad love scenes, some of which include adultery. Lyrics include a few suggestive phrases, and there's also some drinking and a quick shot of a woman using a bong.

Sex scenes include one when Jamie and Cathy first meet; they're shown half-dressed tussling around on a bed (she's in just a bra, and he's shirtless as they're under the sheets). In another scene, they're in bed, and you see bare shoulders. And during one song late in the film, he commits adultery with various women, all of whom wear skimpy lingerie. Some song lyrics are suggestive.

Despite being about the demise of a marriage (due to physical separation and lack of emotional support), the movie has worthwhile messages about how insecurity and resentment can eat away at a loving relationship. Also, you can't avoid success to make someone else feel better about their own losses, and it's important to believe in yourself.

Adults drink at parties and receptions. In a quick shot of Jamie's ex-girlfriends, one smokes a bong.