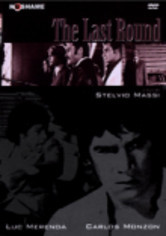 1976 NR 1h 52m DVD
Stelvio Massi's crime thriller centers on a drifter who sets out to help blue-collar workers rise up against the two powerful families who are exploiting them. After settling in an industrial town and witnessing the cruelty of the factory owners, ex-mercenary Marco (Carlos Monzón) assumes the role of union agitator. When a violent confrontation erupts, the labor leader is driven to bring down the corrupt clans. Luc Merenda co-stars.