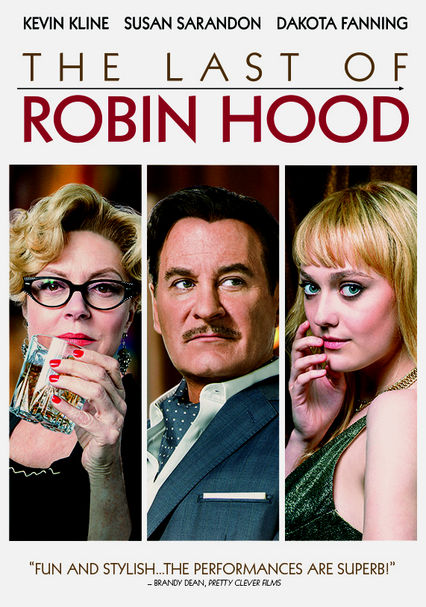 2014 R 1h 30m Blu-ray / DVD
Kevin Kline stars as an aging Errol Flynn in this biopic that chronicles the womanizing actor's relationship with teenager Beverly Aadland. The film examines Beverly's mother's role in the affair and the private demons behind Flynn's reputation.

Parents need to know that The Last of Robin Hood centers on a relationship between aging movie star Erroll Flynn (Kevin Kline) and an underage teenage girl (Dakota Fanning). It's a scandalous -- and illegal -- romance, and the film veers between portraying it as predatory and loving. There are some brief scenes of the couple in bed, and sex sounds are heard, though there's no graphic nudity. The girl's age is discussed frequently. Many people smoke cigarettes, as was common at the time the movie takes place (late '50s), and there's also a fair amount of drinking, some drug use, and swearing (including "f--k" and "c--t.")

A much older man becomes involved with a very young teen. He seduces her almost immediately after they meet in an encounter that definitely looks predatory. She doesn't resist or complain, but she doesn't seem very happy about it, either. Other scenes include clear sex sounds, and the couple is later shown in bed, where she's a much more willing participant. The relationship ultimately seems loving and satisfying to them both at times, even though their age difference is so vast that it's not only scandalous but also illegal, and there's always a significant power differential between them. There's no graphic nudity, though the man is shown in one scene playfully prancing around nude (while on drugs), using a hat to shield his genitals.

Even if people seem to be in love, there are times when a relationship has such a poor foundation that it can't be healthy. That's the case here when a wealthy, powerful, older man gets involved with a very young teenage girl -- their romance at times seems satisfying to them both, but it's never a partnership of equals.

Many characters smoke cigarettes all through the film -- which is accurate for the late-1950s setting. People also have wine, champagne, and other strong drinks. A much older man plies a teenage girl with champagne in an effort to seduce her. One character is said to have an addiction problem and is seen injecting himself with drugs.