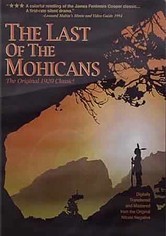 1920 NR 0h 39m DVD
This silent film version of James Fenimore Cooper's adventure novel packs a wallop. During the 18th century wars between the French and English, Huron Indian Magua sides with the French, while Mohicans Uncas and Chingachgook remain loyal to the Brits. The action gets intense during the Fort Henry bloodbath, but the movie's dramatic climax comes when the commander's daughter threatens to jump from a cliff rather than fall into Magua's clutches.