The Law and the Fist 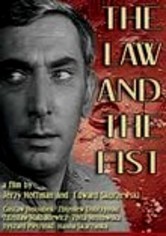 The Law and the Fist

1964 NR 1h 30m DVD
At the end of World War II, a group of Poles move to what was once German-occupied territory and must defend their rights and property from opportunistic villains disguised as officials in this modern drama with a classic Western story line. In the end, a lone hero steps up to run the bad guys out of town and save the day. Filmmaker Jerzy Hoffman's drama stars Gustaw Holoubek, Wieslaw Golas and Zofia Mrozowska.