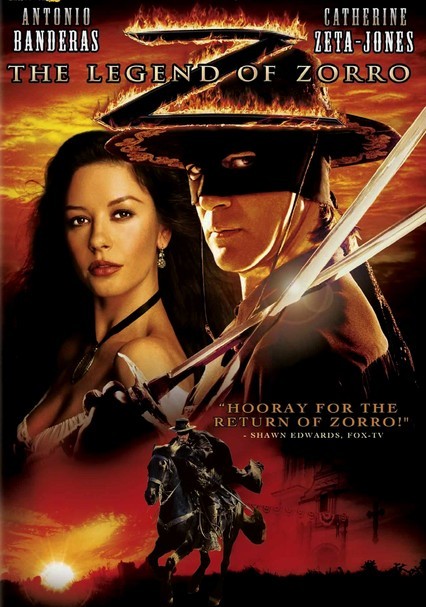 2005 PG 2h 10m DVD
After being persuaded by his resentful wife to hang up his alter ego's sword, Don Alejandro de la Vega returns to action as the masked avenger Zorro when he gets wind of a scheme to sabotage California's bid for statehood.

Parents need to know that the movie contains lots of outrageous and stunty violence: explosions, shootouts, sword-fighting, horseback riding, leaping from rooftops and atop racing trains. While most is suitably cartoony, there is one bloody murder (by a sinister villain and his gang) of a sympathetic peasant as he tries to defend his home, leaving his tearful wife and an aggrieved Zorro behind. A young boy is threatened and watches villains beat and almost murder his father. This boy also engages in his own antic violence against the bad guys. Characters smoke (cigars) and drink (sometimes to the point of drunkenness).

Some suggestive imagery (cleavage especially), and some banter.

Drinking at parties and in loneliness, as when Zorro despairs over Elena's rejection and gets drunk. A horse drinks and smokes cigars, too.