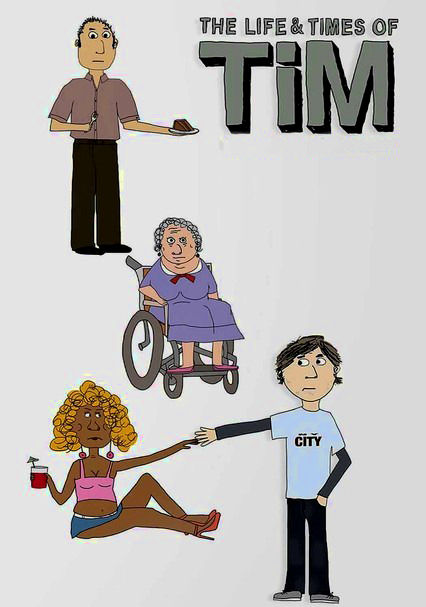 Originally airing on HBO, this animated sitcom details the trials and tribulations of the titular Tim (voiced by Steve Dildarian), a regular guy with a knack for blowing opportunities that could make his lame life a little better. The show's cast of eccentric supporting characters includes M.J. Otto as Amy, Tim's supportive girlfriend; Bob Morrow as Debbie, a prostitute who lives next door; and Cheri Oteri as Chuk, an Asian bartender.

Awkward-moment magnet Tim (voiced by series creator Steve Dildarian) is back for a second season of uncomfortable silences in this animated HBO series about a twentysomething everyguy who can't seem to catch a break. Mary Jane Otto returns as the voice of Tim's serially disappointed girlfriend, Amy, with Bob Morrow providing the pipes for Tim's lovingly supportive neighbor, Debbie, an aging African American prostitute.

Parents need to know that this mature pay-cable series, though animated, isn't intended for kids. There's lots of strong sexual innuendo (one character is a working prostitute), as well as references to various sex acts and animated nudity (bare buttocks) and lots of bad language ("f--k," "s--t"). Characters also drink, get drunk, and smoke cigarettes; there are occasional references to hitting or slapping women; and occasionally a weapon is brandished.

Tim solicits and then befriends a prostitute. Lots of strong sexual innuendo, including references to oral sex and other sexual acts. Also includes references to homosexuality. Occasional animated nudity (bare buttocks). One episode refers to the acronym NAMBLA (the name of a male pedophile organization).

Occasional references to slapping or hitting women. Knives and other weapons are occasionally visible.

Nothing is bleeped; audible language includes everything from "bitch," "ass," and "whore" to "s--t" and "f--k."

Tim makes a lot of silly and often bad choices on a day-to-day basis. Lots of stereotypes about Latinos and other ethnic groups. The animated characters are primarily Caucasian.