The Life a House Built: The 25th Anniversary of the Jimmy & Rossalyn Carter Work Projec 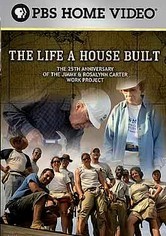 The Life a House Built: The 25th Anniversary of the Jimmy & Rossalyn Carter Work Projec

2008 NR 1h 0m DVD
President Jimmy Carter and his wife discuss the 25 years they've spent working with Habitat for Humanity and their Jimmy and Rosalynn Carter Partnership Foundation project, in this illuminating documentary. The film showcases Habitat for Humanity's 2008 Blitz Build campaign to rebuild the Gulf Coast and demonstrates Carter's far-reaching impact, the result of a determined man who refuses to ignore people in need.