The Life and Art of Ernst Ludwig Kirchner 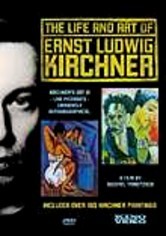 The Life and Art of Ernst Ludwig Kirchner

2001 NR 1h 26m DVD
With his innovative paintings, sculpture and drawings, Ernst Ludwig Kirchner became an iconic figure among the many talented European artists in the beginning of the 20th century. He had many admirers, but also made enemies in the Third Reich, who considered his work subversive and unacceptable. Marginalized by the Nazi government, he committed suicide in 1938. This documentary charts his rise and fall and examines his legacy.