The Life and Times of John F. Kennedy 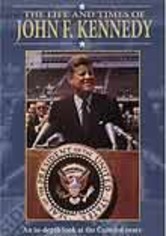 The Life and Times of John F. Kennedy

1964 NR 0h 55m DVD
Esteemed actor Cliff Robertson narrates this moving documentary, which was produced just months after President John F. Kennedy's 1963 assassination. Through a montage of photos and film clips, the program chronicles the idyllic "Camelot" years of the 35th president and his elegant society wife, Jacqueline Bouvier Kennedy, as well as JFK's childhood, his naval service during World War II and his early days as a young politician.