The Life of Million Dollar Babies 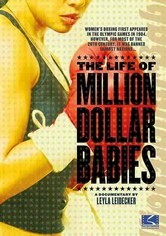 The Life of Million Dollar Babies

2007 NR 1h 13m DVD
Follow the struggles of eight women as they train to fight in the 2005 National Golden Gloves boxing competition, a contest that didn't allow women to compete until 1995. Chronicling the dramatic history of women's boxing and profiling a group of scrappy young fighters, filmmaker and boxer Leyla Leidecker delivers a knockout documentary experience. Leidecker was a sparring partner for actress Hilary Swank as she prepared for Million Dollar Baby.