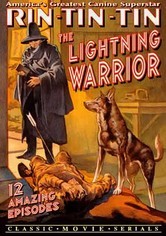 1931 NR 3h 30m DVD
World-famous German shepherd Rin Tin Tin is featured in this 12-episode serial, in which Rinty becomes embroiled in an Indian uprising caused by the Wolf Man, a criminal who has been terrorizing the settlers of a small western town. Rinty helps young man Jimmy Carter (Frankie Darro) uncover the identity of the mysterious Wolf Man, who killed Jimmy's father, and to end the outlaw's reign of terror and his attempted theft of a gold mine.