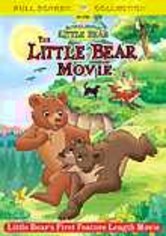 2001 G 1h 15m DVD
While camping with his dad, Little Bear meets a lost bear aptly named Cub, who's looking for his parents and enlists Little Bear's help in finding them. With Duck, Cat, Owl and Hen by his side, Little Bear tries to turn Cub's dream into reality. Kristin Fairlie provides the voice of Little Bear in this big-screen adaptation of the animated Nick Jr. series based on Else Holmelund Minarik's children's tales.

Parents need to know that the plot of The Little Bear Movie centers around a bear named Cub who is separated from his parents during a dangerous storm. Though the film is overwhelmingly positive and sweet, there's some menace in a few key scenes that involve a mountain lion named Trouble who intimidates and means to eat the animals.

The plot is driven by the separation of a bear cub from his family during a violent storm. Some menace shows up in a few key scenes from a predatory mountain lion.