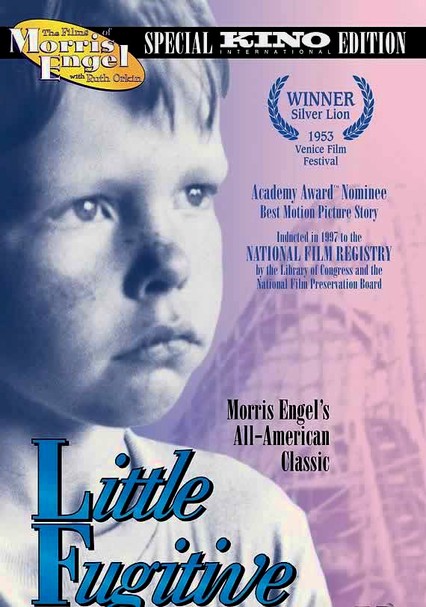 1953 NR 1h 20m DVD
When his brother's friends pull a prank on him and convince him that he killed his brother, a 7-year-old boy sets out to hide at Coney Island, where the amusement park and its characters come to life through a child's eyes.

Parents need to know that Little Fugitive is an influential 1953 coming-of-age film where the main characters are two brothers, 7 and 12, who end up in some fairly grown-up situations. The movie revolves around a cruel practical joke in which the younger brother is made to believe that he has shot and killed his older brother with a real gun (it's actually a toy). The younger boy runs away and is on his own for most of the movie. In addition to the practical joke and the use of toy guns, we see kids fighting; couples on the beach kissing, and language includes phrases like "shut up, you dope."

We see several older couples kissing on the beach. One little boy's naked bottom is on view.

The major plot device concerns a mean practical joke, making a 7-year-old believe that he has shot and killed his 12-year-old brother with a real gun. One of the older boys scares the younger boy with: "You'll fry.... you'll burn!" The younger boy runs around for the entire film with a toy gun, and the older boy gets into a fight with his friend (mostly wrestling, pushing, and pulling). There's also a reference to the boys' father being dead. At the carnival, there's a quick montage of scary images.

Despite starting off with a terribly cruel practical joke, Lennie realizes the error of his ways and tries to correct his unethical behavior. In the end, the brothers learn a new kind of love and respect for one another.

Coke and Pepsi bottles are on view throughout the movie, but not prominently. (The younger boy collects all kinds of empty bottles for the deposit money.) Also, some billboards for Pepsi and Seagrams are visible.