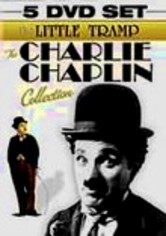 1914 NR 5 discs
A comprehensive collection of shorts produced in the early stages of Charlie Chaplin's film career reveals a comic genius in the making -- and the reason his Little Tramp character became his trademark. The five-disc set presents a treasure trove of shorts, each showcasing the talent that would grow into the stuff of Hollywood legend. Bonus material includes rare Chaplin cartoons, plus a documentary featuring fellow funnyman Buster Keaton.