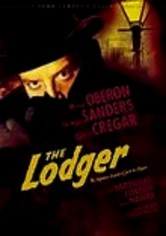 1944 NR 1h 24m DVD
Though well-aware of the Jack the Ripper slayings, Robert and Ellen Burton (Cedric Hardwicke and Sara Allgood) take in a lodger to make ends meet. But as the actions of their mysterious boarder (Laird Cregar) grow increasingly suspicious, the couple wonders if they've opened their home to a killer. Based on the novel by Marie Belloc Lowndes, director John Brahm's creepy thriller also stars George Sanders and Merle Oberon.