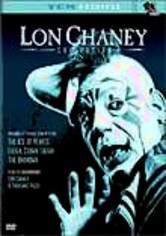 1927 NR 3h 1m DVD
This tribute to Lon Chaney features the 1927 movie The Unknown, in which Chaney portrays an armless knife thrower. Biographer Michael Blake also shares his views on the premier silent film illusionist in an audio commentary. In addition, a version of the unfinished Chaney feature London After Midnight is included, as well as the documentary "Lon Chaney: A Thousand Faces," narrated by Kenneth Branagh.