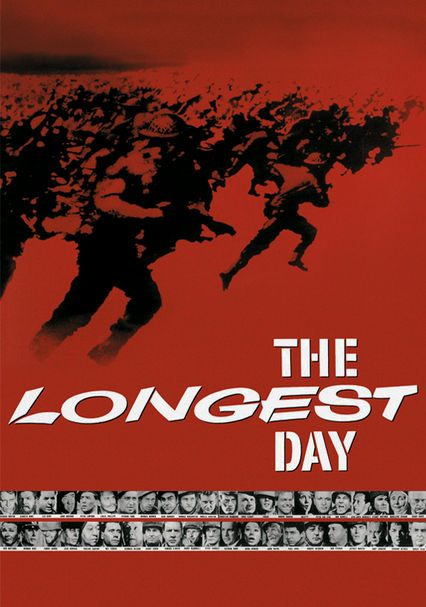 1962 G 2h 58m Blu-ray / DVD
This Oscar-winning war epic chronicles World War II's harrowing D-Day invasion. Shot on the beaches of Normandy, France, the ambitious film attempts to cover the historic day from all perspectives, focussing on both sides of the conflict.

Parents need to know that The Longest Day, a black-and-white docu-drama released in 1962, is a predominantly accurate depiction of D-Day, June 6, 1944, when Allied troops invaded German-occupied Europe via the western coast of France. The film, which takes place over one 24-hour period, uses three distinct points of view -- American, English, and German (with subtitles) -- to tell the story. The first two hours reveal the preparations and initial skirmishes that set up the final hour -- a depiction of the massive air and sea battles that launched the Allies' assault on Omaha Beach in Normandy. Combat is almost continuous. Men are gunned down; lifeless bodies are seen on the beach; some dead hang from trees. Despite that, both graphic violence and brutality are kept to a minimum; the camera does not dwell on the human destruction. An effort is made to show German officers in a balanced way, though some are buffoonish and wrongheaded to the extreme. A momentous achievement when it was released (filmmakers didn't have special effects and computers to rely on), the film retains the historical and emotional impact that was intended. Some smoking, drinking, and a few "hells" and "damns" are heard.

A woman flashes some décolletage to distract German soldiers.

The full final hour of the film, as well as some earlier scenes, show men engaged in battle. Men on both sides of the conflict die from gunfire, explosions, and accidents. Dead bodies strewn across a beach are seen in the background of numerous sequences. Dead paratroopers hang from trees. Many scenes show hand-to-hand combat, and characters fight for their lives. A train blows up; a solider tries to drown a woman; a fleeing partisan is shot in the back. Despite all of the above, this film was made in the early 1960s and, as was the case at that time, there are no graphically violent visuals or stomach-turning injuries shown.

Uses three points of view (American, English, and German) in an attempt to create an even-handed, humanizing approach to the events of D-Day. Without extended graphic depiction of the war's most heinous injuries and brutalities, confirms that "war is hell." Confined in scope to a single day, the film cannot comment upon the long-term effects of such life-changing experiences and the inevitable scars, but it is sincere in its effort to deliver a complex picture of the realities of battle.

Set in wartime 1944, characters smoke; one general chews and smokes a cigar throughout. Champagne, beer, and whiskey are consumed moderately in a few scenes.