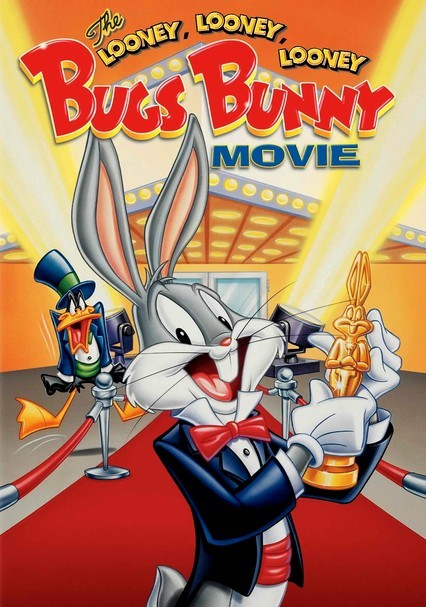 1981 G 1h 20m DVD
Bugs Bunny moves his wascally wabbit mischief to the big screen in this full-length animated film that finds Yosemite Sam making a deal with the devil, Bugs dressing in drag, and Daffy pitching a fit at the Oscar-esque "Oswald Awards."

Parents need to know that while there are many joys in revisiting these classic, laugh-out-loud cartoons, they should also be aware that there's lots of cartoon violence and name calling. Younger children might want to mimic some of the characters, which could get them in trouble! But parents will enjoy the gags aimed at adults, and mature kids will love the classic characters.

Lots of cartoon violence. The ole' one-lump-or-two gag shows up more than once here. Guns are touted, used as weapons, and used as threatening devices. Lots of smacking, bonking, even shooting and exploding, in the name of comedy.

"Stupid" is a word commonly used as an insult. "Shut up," "I hate you," and "idiot" are also shouted. Satan is featured in the first act, and his domicile is referred to as "hell."

Lots of name calling and silly slapstick humor that kids love to imitate.

When Daffy Duck blows up after hitting the wrong note on a rigged xylophone, he says: "Good thing I've got Blue Cross." Academy Awards, Oscars, and Emmy Awards are all mentioned. The original tongue-in-cheek ACME brand is featured as a cereal. Characters arrive at the "Oswald" Awards in fancy cars and nice clothes.

Cigarettes are featured in a couple of shorts. Bugs Bunny himself has a cigarette dangling from his mouth in a scene as a cowboy. Rocky the mobster smokes and even lights a stick of dynamite with his cigarette. His fellow mobsters smoke cigars. In the preview short, Sir Osis of Liver is show drinking wine.