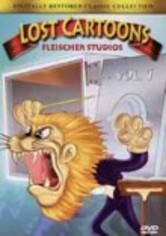 2005 NR 1h 0m DVD
Between 1921 and 1942, Dave and Max Fleischer led Fleischer Studios, an entity that broke the ground for animation and its place in history. For a good run, Fleischer was Walt Disney Studios' biggest competitor, a worthy foe that was responsible for such characters as Koko the Clown, Betty Boop, Popeye and the "strongest" of them all, Superman. Through their many contributions to the genre, the Fleischers helped animation become what it is today.