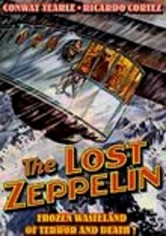 1929 NR 1h 11m DVD
A love triangle complicates a doomed mission when a crew of explorers attempts to be the first to reach the South Pole by dirigible in this early special effects extravaganza. With the expedition's progress being broadcast via radio, no one's following the news more closely than the woman (Virginia Valli) who's married to the commander and having an affair with the first mate -- especially after the zeppelin crashes, leaving just one survivor.