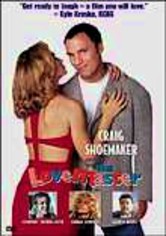 1999 R 1h 24m DVD
Stand-up comic Craig Shoemaker blurs the line between truth and fiction in this hilarious snapshot of his life. Between performance scenes, Shoemaker stars as a version of himself who's living the material he presents on stage. He spills his problems to his therapist (George Wendt), including stories about his estranged wife (Harley Jane Kozak) and a string of bad dates. Courtney Thorne-Smith and Farrah Fawcett co-star.