The Mafia: An Expose - The Kennedy Connection and Gallo/Colombo/Bonanno 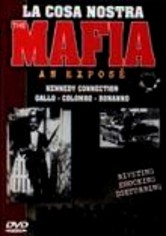 The Mafia: An Expose - The Kennedy Connection and Gallo/Colombo/Bonanno

1998 NR 1h 30m DVD
Part of a series documenting the history of the Mafia in America, this segment of The Mafia: An Expose explores -- through photos, film and interviews -- the possible connection of John F. Kennedy's assassination to organized crime. The second part of this documentary covers the war between competing mob families in the 1960s as they tried to gain rule over their territories, a war in which kidnappings and mob hits became commonplace.